Sincil Bank Stadium welcomed Morning Star and Bottle & Glass for their trophy final in front of a sizable crowd on a perfect evening for football. 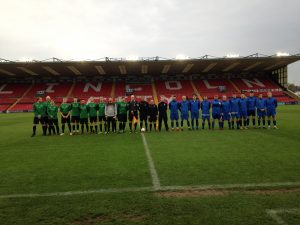 Bottle & Glass kicked off attacking the Stacey West end of the ground on an amazing playing surface which resembled Wembley at the beginning of a League Season, not one that had played host to the EFL League 2 Champions for the last 8 months of the year.

They signaled their intentions right from the off when Max Wright forced a corner off the Star’s skipper Will Drury in the very first minute of the game but the resultant kick, taken by James Stocks, was comfortably taken by the safe hands of keeper Ash Franklin.

Both sides competed well and played some good passing football but Bottle & Glass seemed to settle the better of the two sides during the opening 15 minutes although Morning Star looked quick and decisive on the break. None more so than in the 15th minute when Stocks broke down the right flank before playing the ball to Daniel Reynolds. He cut inside but dragged his shot just wide of the target.

Once the game settled both sides looked lively with both front lines having pace to unsettle their opponents. Stocks, for Bottle & Glass, and Crampton, for Morning Star, both looked dangerous whenever they were involved in the final thirds of the pitch.

Tommy Johnson threatened for Bottle & Glass on 23 minutes when he jinked his way into the box with good skills but was denied only by a last ditch tackle by Matthew Smith.

The game really livened up in the 28th minute when both sides went close within a minute of each other. Firstly Scott Cameron looked to shoot inside the area for Bottle & Glass but he was denied by a last ditch tackle by Grant Hudson and as the ball was cleared Morning Star worked the ball well through to Joe Walukiewicz who found the ball nicked away from him at the last minute as he was about to get his shot away.

The first half ended goal-less and both sides could be pleased with their performance despite the fact that neither keeper had been stretched to make a serious save.

The second half began as the first half ended with both defences well organised and with both sides looking good on the counter attack. Grant Hudson became the first player to enter into referee Mr Stimpson’s notebook in the 56th minute after a crude challenge on Alex Matthews. The resulting free kick, taken by James Stocks, from just outside the area was easily held by keeper Franklin. 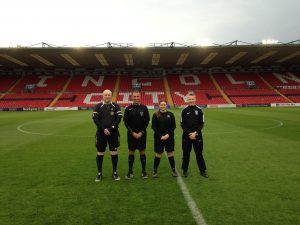 Stocks was in the headlines again a minute later when he burst through into the box at pace before falling under a challenge by two defenders. Referee Stimpson was right on the spot to say no foul and a goal kick resulted. To be fair to all players around there were no protests, testament to the excellent decision made by the referee.

As the game wore on Morning Star turned the balance of possession somewhat and they then became the more dangerous looking of the two sides. Steve Marshall must have thought that he had broken the deadline for Morning Star in the 64th minute when his thunderous shot looked to be heading into the corner of the net but a brilliant reaction block save from Sam Brown kept the tie goal-less.

Walukiewicz was at the centre of some tidy play on 70 minutes when he played in Tom Robinson and his delightful cross  was steered wide by Paul Crampton.

Perhaps the defining minute of this game arrived in the 77th minute when Jack Houltby fouled Robinson. Robinson floated the resulting free kick into the Bottle & Glass penalty area and a thunderous goal-bound shot was somehow cleared off the line via a melee of players. Perhaps this was the writing on the wall that despite my pre-match write up bigging up the goal scoring prowess of both sides that the end result was going to be both sides drawing a scoring blank.

So it proved to be and the 90 minutes came to end where endeavor, commitment, no lack of skill, and good organisation brought the rarest of results in local League football where neither side had managed to score. It is not often that that happens. Extra time was then necessary to try to determine the destiny of the trophy for this Season.

4 minutes into the first period of extra time brought the crowd to their feet as a great effort by Tom Maloney, on as a replacement for Tom Buchanon-Spence, curled a superb effort on goal but the ball cannoned off the inside of the post and back across the box with keeper Franklin well beaten.

Crampton then had a great opportunity for Star just before the break when he went through on goal with a one on one with the defender but with colleague Steve Marshall unmarked and alone in the middle he opted to go for goal and his shot went into the side netting.

The second period of extra time, not surprisingly, saw fatigue and cramp starting to affect a number of players from both sides and the game ended 0-0. Drama was certain to follow with the result now being determined by the taking of penalty kicks.

Bottle and Glass took the first penalty which was placed neatly into the corner of the net. Morning Star converted their penalty. Glass converted their second penalty before keeper Brown made an excellent save to give Glass the advantage at 2-1. Glass then converted their 3rd penalty, as did Star, before Glass added a 4th making it 4 out of 4 for the 4th Division team. Keeper Brown then made a stunning save to keep out Star’s 4th penalty which saw the game end with a 4-2 penalty win for Bottle & Glass.

This game was a great advert for local football and all involved should be congratulated for their commitment and respect for such an occasion. It was a real privilege and experience to play at the home of the EFL League 2 Champions after their magnificent achievements during the past Season and Lincoln City Football Club deserve massive thanks for not only hosting, but also sponsoring all 4 of the League’s domestic Cup Finals this year.

Finally Match Referee Mr Paul Stimpson was blowing his whistle for the very last time after announcing his retirement and his performance, together with all of the Match Officials, was outstanding, contributing in no small way to a real spectacle as a football match. The League wishes to thank Paul for all of the games that he has done with the League over the years and to wish him all the best now that he can put his whistle, book, and cards away!

Cup Finals come round fast at this time of year with the second final being played tonight, again at Sincil Bank, this time it is the Kelly Read Cup Final between Anglers FC and FVA Jerusalem. Kick-off is at 7.30pm and all are welcome.