This game saw the 3rd Division Champions play the team that finished runners up in the 2nd Division so an intriguing game of football was always on the cards. Couple that with the fact that Morning Star were returning to Sincil Bank after the heart-break of losing the Jock Mitchell Memorial Trophy Final there on Tuesday night and not only that, Plough Sturton were playing their second Fred Quibell Cup Final in successive Seasons as they lost out to Coningsby FC in last Seasons Final, and we had a real contest on our hands for sure. 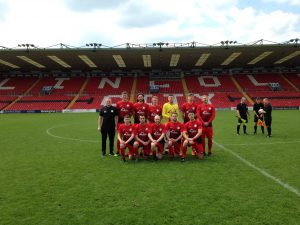 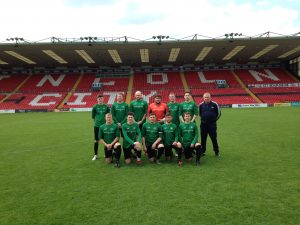 Morning Star got the game under way attacking the South Park end of the ground. Their start to the game appeared a little shaky, none more so than when Matt Smith sold his goalkeeper short with an under hit back pass which saw keeper Dan McCardell racing out of his goal to clear into touch hurriedly.

Sturton had the opening chance when Jake Long whipped in a quality cross and Tom Everington headed straight at the goal keeper on 4 minutes.

Bembridge was a commanding figure in the Sturton goal and his handling and punching clear was impressive during the opening period.

8 minutes in and Plough Sturton really ramped up the pressure on the Star defence forcing them to clear 2 goal bound efforts off the line in the same move but before they could clear their lines a defender clattered into Plough’s James Patching and referee Sackree, 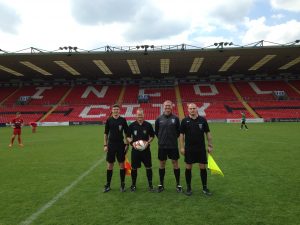 who was right on the spot, had no hesitation in awarding Plough the penalty. The kick was taken by Tom Everington who expertly put the ball into the corner, to the keepers left, to give the Sturton based side the lead.

McCardell was called into action after 17 minutes when he produced a brilliant save at the expense of a corner after the ball had been hammered goal bound by Everington. Joey Walukiewicz displayed great understanding of the game a minute later when he produced a superb tackle to deny Patching on the edge of the penalty box with a last ditch tackle.

As the game neared the half time stage both goal keepers produced a great save apiece to keep the game alive as the game entered more of an “end to end” stage as Plough looked to extend their lead and Star looked to level matters.

After 3 minutes of time added on referee Sackree brought the half to an end and the game was nicely balanced with just the one goal separating the two teams. As the teams left the pitch I am certain that Plough’s Manager would have been the happier of the two managers judging by the look on Star’s Manager, Dave Gregory’s face! 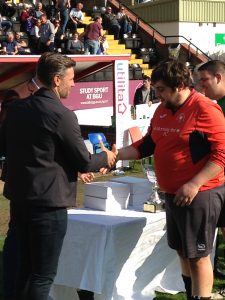 Dan McCardell, judged to have had the most outstanding game by both  league sponsor Steve White and Nicky Cowley, receiving his trophy.

into a stunning save when his roof bound thunderous shot was pushed over the bar for a corner in the very first minute. The same keeper was somewhat fortunate 5 minutes later when his clearance was hit straight at William Lansdall and the ball ran out for a goal kick, the ball could have gone anywhere but fortune favored the keeper on this occasion.

The game started to become stretched early in the second period with both sides going with an all out attack, something that was great for the expectant crowd to see. On 54 minutes Paul Crampton played the ball to Joey Walukiewicz before receiving it back to strike for goal which saw his shot saved. Plough then went straight up the other end with a killer ball played over the top which saw Ben Light clean through with a clear run on goal. He took the ball forward but with the goal at his mercy shot straight at the grateful McCardell to keep the score unchanged.

Morning Star levelled the game up on 64 minutes with a goal that many would describe as messy but they all count and nobody in the Star team will be bothered about that. Joey Walukiewiz crossed from the left found Matt Smith lurking in the box and he somehow managed to stab the ball over the line from close range 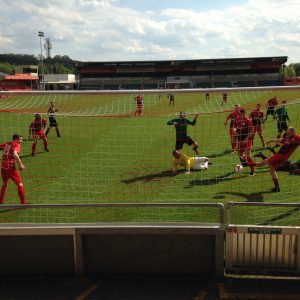 despite a whole host of players around him. Now it was anyone’s game and certainly Morning Star looked much better during the second half of the game, no doubt after a half time talk from Manager Gregory.

Both sides had chances during the remaining period but no further goals arrived and the game finished all square at one apiece. Extra time was necessary and in Star’s case this was for the second time in just 5 days.

Plough got this period under way attacking the Stacey West end of the ground and from the kick-off Morning Star showed no ill effects of their midweek marathon as they looked lively straight from the kick off. Indeed they took the lead with what proved to be the winning goal after just 3 minutes of the opening period when Paul Crampton broke down the left wing before putting an expert cross into the box for Steve Marshall to ram home from 6 yards, much to the delight of his team mates and supporters in the ground. 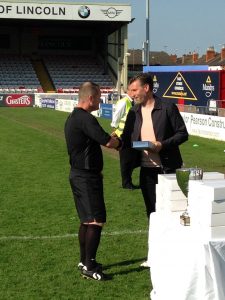 brought to a close not only the game but the League Season with this being the last Final of the 2018 / 2019 League Season.

As the crowd gathered for the presentation the League had a very special guest to announce to delight all that were in attendance. Lincoln City joint Manager, Mr Nicky Cowley, was announced and the excitement that followed as he walked from the players tunnel and onto the pitch took matters to a whole new level. The trophy and memento’s were then presented to the players by Nicky Cowley and Mr Steven White, our League Sponsor, before Joey Walukiewicz lifted the trophy to bring proceedings to an end. 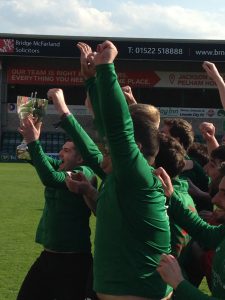 As a special touch Nicky Cowley then had his photograph taken with all of the players and the Match Officials, and to make the matter special for everyone he allowed the crowd to enter the pitch and anyone wanting their photograph taken with him was allowed to do just that. Everyone in attendance went home happy and it was wonderful to see local footballers, and the people who supported the event, looking so thrilled at what they had just seen. What a fantastic way to end our Season by a fantastic man, that we, as a League, were so lucky to have as our special guest of the day. Thank you Lincoln City and thank you Nicky – a truly brilliant experience for all those fortunate to be involved. 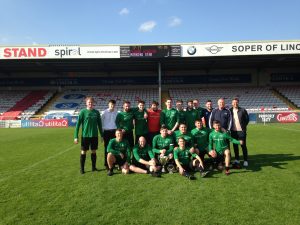