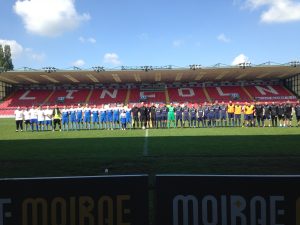 This Season’s Ron Eaglen Challenge Cup Final saw the Premier Division’s League winners come up against newly promoted AFC Golden Eagle. The Eagle have risen in quick time from Division 4 of the League and have shown this Season that on their day they are a match for anyone, they also had the prolific Jack Higginson leading their forward line so a mouthwatering game was in prospect. 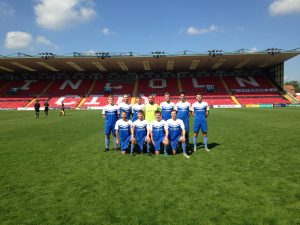 Hykeham Town TRFC were also looking to put the disappointment of a recent County Cup Final defeat behind them as they went in search of a League and Cup double to end what has been a fabulous Season for all involved with the Club. 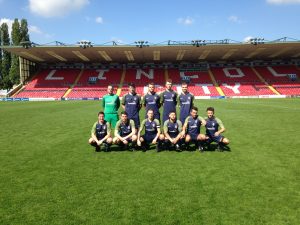 Golden Eagle got the game under way attacking the South Park end of the ground in bright sunshine, a far cry from the inclement weather and cold temperatures that greeted the previous finalists earlier in the week. In the early exchanges it was the Hykeham side that were asking the questions with the Eagle defence looking like they were going to have plenty to do. As early as the 4th minute Malcolm Redford had to be alert as he thwarted Callum Chapman before Eagle keeper Chris Bennett was forced into a reaction save from the follow up.

Bennett was called upon a minute later when he was only able to parry a shot from Andy Anderson but that proved to be vital as Eagle went straight up the other end and took the lead, somewhat against the run of play from the opening  first five minutes. It was the danger man Higginson who broke free at pace and he took the ball forward before calmly slotting the ball past keeper Wayne Greaves to give his side the lead with a left footed strike. 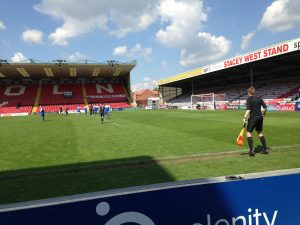 Hykeham had the opportunity to equalise a couple of minutes later when a dangerous cross from Jayden Driver found the head of Andy Anderson but his header went wide of the mark. The lead was short lived however as Steve Mehta scored a brilliant leveller on 9 minutes when he nicked the ball off a defender on the edge of the box with an audacious flick over the keepers head, just as the defender was about to clear.

Callum Chapman must have thought that he had put Hykeham in front on 11 minutes when his strike looked to be heading in before Redford managed to hack the ball off the line to keep the scores level after his shot had been spilled by Bennett. A minute later however Hykeham took the lead when  the same player, Chapman, played a delightful cross into the box to find the head of Mehta who headed home unchallenged from 6 yards. 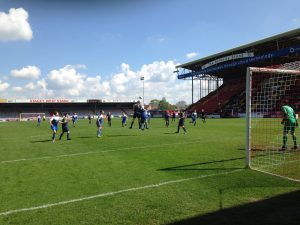 2-1 became 3-1 after 21 minutes when Andy Anderson found himself unmarked in the box, having the easiest of chances of heading home the corner that was swung in by Driver.

On the half hour mark Eagle were back in the game when Edward Davies was fouled in the box and referee Mike Redgrift pointed to the spot at the same time that Assistant Referee Danny Topliss flagged for the penalty kick. 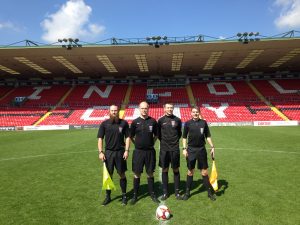 Excellent Officiating from the 2 Officials. Kallum O’Melia placed the ball on the spot and he had no problem converting the penalty as he sent keeper Greaves the wrong way to reduce the deficit.

Hykeham regained their 2 goal advantage after 37 minutes following some smart play and inter change which was started and finished by Andy Anderson. He played the ball to Chapman who in turn sent Driver free down the right flank. His measured cross found Anderson again unmarked in the centre of the box and he netted his second goal with the simplest of headers. By now it must have been a cause for concern to the Eagle Management at the free headers that they were conceding in their penalty box as nearly every cross was leading to goals.

Despite plenty of action at both ends there were no further goals and the teams went off for their 15 minute break with Hykeham in the ascendancy and Golden Eagle having plenty to think about for the second half.

The second half saw both teams enjoying plenty of possession in the midfield areas of the pitch but without troubling their opposition goal keepers until the hour mark when Davies looked to have clawed a goal back for Eagle as his shot was heading towards an empty net until Josh Thomas made a great clearance from the goal line just in the nick of time.

Eagle Keeper Bennett made a good save in the 64th minute but as the ball broke Chapman was alert and he followed up to make it 5-2 with a good finish.

Steve Mehta was in the thick of the action again on 68 minutes when he was tripped on the edge of the box as he looked to go through in search of his hat-trick. The resulting free kick was taken by James Slater 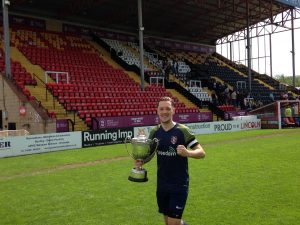 James Slater making off with the Ron Eaglen Challenge Cup

and his goal bound effort was brilliantly saved by Bennett who was at full stretch to claw the ball out with a one handed save.

Higginson reduced his side’s arrears on 79 minutes when he headed home a cross by O’Melia but just 2 minutes later James Dickinson, on as a second half substitute for Hykeham, finished off neatly after rounding the keeper and tapping the ball into an empty net.

The scoring was completed in the 85th minute when Jack Higginson completed his hat-trick by tapping home after the ball had rebounded off the post following a corner taken by Kallum O’Melia.

The League were delighted to introduce 2 Lincoln City Legends with ex-players Phil Hubbard and Trevor Swinburne attending to present the trophy and momento’s to the players. They were assisted by Rob White on behalf of our League Sponsors, White Mortgages Ltd. All of the players and the Match Officials are to be congratulated for their performances in what proved to be an exciting and good game of football. 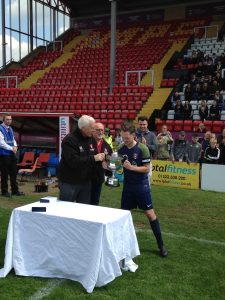 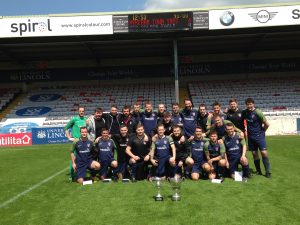