Sincil Bank was the venue for this final between two teams who have a good recent history in this Competition with Anglers being the defending holders of the trophy and FVA Jerusalem last winning the Competition in 2014. 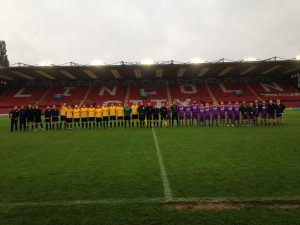 The heavy rainfall during the day had caused some concern about whether the game would be in doubt but great efforts by the Lincoln City Ground Staff ensured that the players had a perfect surface to experience with every blade of grass looking pristine. 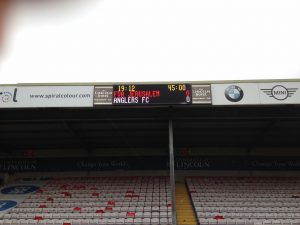 Anglers FC got the game under way attacking the South Park end of the ground and it wasn’t long before Blake Colcomb, the FVA keeper, was tested when Craig Bridge let fly with a crisp shot on 3 minutes following a defensive slip in the FVA back line. The ball hit the keeper before clipping the post and going out for the first corner of the game in the 3rd minute

Two minutes later and it was their opponents, FVA Jerusalem, who took the lead with the first goal in this Season’s League Cup Finals through open play. Lee Stanney headed the ball through to Kyle Russell who calmly took it forward before finishing smartly with a well placed shot into the corner of the net.

On the 20 minute mark FVA doubled their lead when the same two players reversed their roles with Russell turned provider with a pinpoint through pass to put Stanney through one on one against Craig Rhodes. Stanney then produced the classiest and most audacious of finishes by dinking the ball over the keeper’s head to put his side two goals to the good.

Stanney came close to getting his side’s 3rd goal five minutes later when he dragged his shot wide of the target after he had skipped past Joshua Bowden in the centre of the Anglers defence.

Anglers went close on 27 minutes when a corner, swung in by the dangerous Bridge, caused havoc and the ball was hurriedly hacked off the goal line by an FVA defender and put away to safety as their goal was threatened.

From a seemingly comfortable position for FVA the game changed somewhat after a response from two of the Anglers forwards who seemed to be saying “anything you can do” by producing a replication of a scorer and goal maker act of their own. Firstly Daniel Boulton latched onto a fine pass by Craig Bridge on  31 minutes before finishing with a crisp low shot from just inside the box. Then as had been done previously by Stanney and Russell it was the turn of Boulton to become the provider for his strike partner when his neat cross from the right found the head of Bridge who made no mistake with a bullet of a header from 6 yards out with just a minute remaining on the clock until the break.

Such was the intensity of the game that was now going end to end that with the last kick of the first half Scott Wilson had a great chance to put Jerusalem back in front but he put the ball over the bar and a very entertaining half game to an end. 2-2.

The second period got underway with a fairly even passage of play between two sides who were taking the opportunity to produce attractive football on what has to be described as a magnificent pitch. James Mann, on as a substitute, went close for Anglers on 52 minutes after a peach of a cross by Bridge and a minute later Luke Forbes went close when he flashed a drive just past the post.

Referee Amy Barber was doing her best to help the game with a firm but sensible approach to controlling proceedings but her patience ran out in the 57th minute when a late challenge by Stanney saw him become the first name in the referee’s notebook. 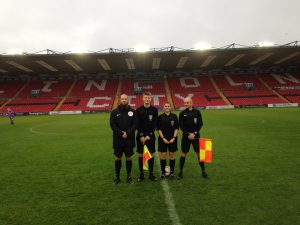 The 62nd minute saw Rhodes pull off a stunning point blank save from Scott Wilson to keep everything all square.

Anglers regained the lead again when Adam Thurston found Boulton who made no mistake from inside the box and as the game headed towards its close FVA tied it all up again after 86 minutes when Russell converted bravely from just outside the 6 yard box after some pacey play down the wing by Andy Wilson.

For the second evening in succession the game finished all square, this one being 3 apiece, and extra time was required to determine who would be taking the trophy home for the next 12 months.

FVA Jerusalem got the first period of extra time under way, attacking the Stacey West end of the ground. History now dictates that the 30 minutes of extra time was going to see Anglers’ striker Jack Wilkinson become their headline maker as he grabbed an extra time hat-trick. He was called upon just one minute into this period after he was felled inside the box after making a surging run down the right after he had been played in by a long ball from Daniel Coo. He immediately picked himself up and after having dusted himself down he calmly placed the ball down the centre of the goal to restore his teams advantage. 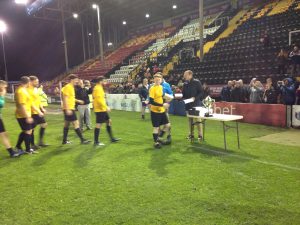 FVA were never going to give this game up lightly and they levelled again when Kyle Russell bagged his own hat-trick after Stanney had out-muscled his marker before placing an inch perfect pass to Russell who converted from 6 yards. Now the game was poised at 4-4 and the excitement could be felt in the crowd with abundance. 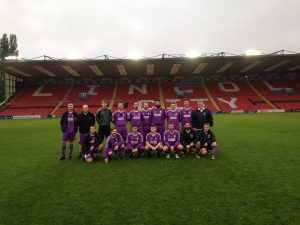 Inevitably on such a big pitch and with a game played at such a pace tired legs and cramp started to affect several of the players as both sides went all out for the win that individually both performances warranted. Another penalty was awarded following a rash challenge on Callum McDonald as he ran through the FVA penalty area and once again Wilkinson took responsibility for the spot kick, this time going for power to the keeper’s left and despite keeper Colcomb getting a hand to it the ball nestled in the net to edge Anglers towards victory.

With time running out Craig Bridge played a through ball to Wilkinson who then faced a one on one with Colcomb for his hat-trick and to put the game to bed. Despite the best efforts of the keeper making the challenge the ball broke favorably for Wilkinson who then had the easiest of chances by rolling the ball into the empty net to complete his hat-trick.

With no further action of note the game ended 6-4 in favor of Anglers which ensured that they retained the trophy for the second year in succession. All participants from both sides deserve immense praise and credit for producing a superb game of football which was a real spectacle for the crowd that braved the elements. Well done to you all! 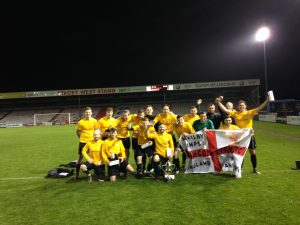 The trophy was presented by Mr Rob White, and Mr Steven White, from the League Sponsors, White Mortgages Ltd, and the celebrations that followed show how much a trophy win means to the winning team after so much effort that is put in throughout the Season. 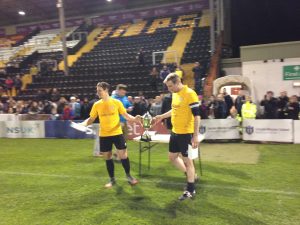 This game will be followed by the two remaining Cup Finals which will both take place this coming Sunday, 12th May. The Ron Eaglen Cup Final will commence at 10.45am and the Fred Quibell Junior Cup Final will follow it at 2.30pm. If these games are anything like what we have seen in the first two finals played then anyone watching is in for a treat!